Is the Heart of the Ocean real?

If you have come this far, you are most certainly one of the people who know what we are talking about when we pronounce these words: "The Heart of the Ocean".

A necklace, a pendant, an amulet, a diamond, a stone, a talisman, a sapphire... Yes, the Heart of the Ocean is a bit all of this at once, but much more! The mystery and magic that surround it make it an object apart! And this is also what brought you to this page.

But where to start to approach the story of this marvelous jewel which has become mythical!? As you will see, the Heart of the Ocean has many unsuspected secrets.

We invite you to learn a little more about it...

The heart... of the Titanic

Let's not beat around the bush! Without the tragedy that struck one of the world's largest ocean liners in 1912, we wouldn't be talking about this sumptuous Blue Stone necklace. From this titan of the seas, the Titanic was born the legend of the Heart of the Ocean, a legend that has no equal but that of this prestigious ship!

Indeed, without this enigmatic event, one of the greatest directors of our time would never have had the opportunity to give birth, in 1997, to one of the masterpieces of modern cinema in the film that dedicated Leonardo Di Caprio and Kate Winslet... or rather should we say, Jack and Rose, the Romeo and Juliet of the 20th century.

Fiction at the service of history

Well beyond the drama of History with a capital H, it is more the story told in James Cameron's film that has unleashed passions and raised this feature film and all its components to the rank of icons. Icons of Romanticism, Passion and Eternal Love.

All the ingredients are there to transport us from dream to nightmare, and yet what we keep is what is most beautiful: Hope, and Jack's Joy of Living, the Grace and Passion that animate Rose until the last moments. And in the midst of all this, there is you, us, and this symbol that is the Heart of the Ocean! Radiant, like Leonardo Di Caprio in one of his greatest roles - he, whose brilliance dazzles us as much as Kate Winslet – she, who was then the most envied woman by all the female population of the time.

And how could we not mention the haunting soundtrack of Celine Dion? "My Heart Will Go On" still resonates in everyone's head. A hymn to Transcendental Love, the sound of which evokes as much the sadness of a Brutal Ending as it does the Fidelity that lasts beyond death!

Has the heart of the ocean ever existed?

To answer this question, (does the heart of the ocean exist?), we must first figure which jewel we are talking about.

Does the Heart of the Ocean refer to the jewel offered to Rose on the Titanic in the film of the same name? Or do you mean a jewel named "Heart of the Ocean" that would have existed outside of fiction? We could still consider it to be the necklace worn by Celine Dion at the 1998 Oscar Ceremony. And what about the jewel used during the filming in 1997???

1) What are the origins of the heart of the ocean?

Perhaps you have never heard of the "Hope Diamond". In the film Titanic, the Heart of the Ocean would have been made from a diamond that made up the crown of King Louis XVI. It is therefore clearly presented in analogy with the legendary Hope Diamond, an exceptional 45 carat blue stone that came from India in the 17th century and was sold to the famous King of France.

Thus, if the Heart of the Ocean, the one from the fiction, did not exist as such, it was inspired by a stone made famous by Henri Hope, the collector who acquired it in the 19th century and gave it his name.

A replica of the famous stone was carved from a real Sapphire, proudly worn by Gloria Stuart (playing the role of Rose at the end of her life) at the Academy Awards in 1998 after the success of the film in cinemas around the world.

2) What is the true heart of the ocean?

Reality has long since caught up with fiction, since several jewelers have made different replicas of the Heart of the Ocean, in different materials, from the noblest to the most insipid, sometimes worth more than a million dollars, sometimes a handful of cents. It is one of those replicas that Celine Dion recently displayed during a walk in the streets of Paris or Shy'm in fall of 2019 during a Dance with the Stars bonus dedicated to the Quebec singer.

During the filming of the film, James Cameron used a white gold jewel, adorned with zirconium crystals, worth around 9000 US dollars. For the moviegoers of which you are obviously a part, this is THE ONE and ONLY "Heart of the Ocean", the one that made its LEGEND, around Kate Winslet's neck!

3) What is the meaning of the heart of the ocean?

If this jewel plays, at first sight, only a secondary role in the film, it is in fact the breadcrumb trail of Love/Hate relationships that haunt the destiny of all these endearing characters in different ways. Also, it is a multiple and complex symbol at the same time. Many people wonder about the message contained in this prestigious necklace. Let's see together what the Heart of the Ocean means.

There is no denying that a shadow was deliberately left by the screenwriters, at the frontiers of mystery and imagination, and that it is this shadow that makes the Heart of the Ocean one of the most famous and enigmatic jewels of the cinema of the twentieth and twenty-first centuries!

Everyone is allowed to dream, so why not you?

Approaching this necklace, touching it, possessing even a fragment of it, a replica of it, is to have the feeling of touching the story. The feeling of being part of it. Taste the dream! This is the symbol that gives fans all over the world the irresistible desire to appropriate it a little, a lot, passionately...to say the least!

Owning it is already a little piece of a dream come true. But to carry it with you, for an evening, a whole day or every day that passes, is a bit like Embodying the Legend.

This is the promise We make to you with the Official Replica of the Heart of the Ocean proposed by Alicia Carat. This precious medallion with its Royal Blue Swarovski® crystal, encircled with brilliant zirconium oxide stones and with a flawless finish is EVERYTHING true! 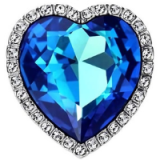 Comments will be approved before showing up.

Become a member of Heart of the Ocean

Discover our new Titanic jewels and get discounts to enjoy them!